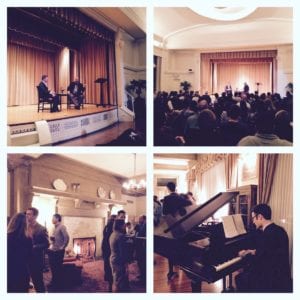 On Wednesday February 4, the Newbigin House of Studies hosted a conversation with Peter Thiel at the Century Club of California.  The evening began with a reception including wine, appetizers, and live piano from local jazz musician Adam Schulman.
Scot Sherman led a 75 minute conversation with Peter Thiel. Peter is well known as a builder of breakthrough companies—especially as the cofounder of Paypal and Palantir Technologies, and as the first outside investor in Facebook. He provided early funding for LinkedIn, Yelp, and dozens of successful technology startups. He is a partner at the Founders Fund, a Silicon Valley venture capital firm that has funded companies like SpaceX, Airbnb and Lyft. He started the Thiel Fellowship, which encourages young people to put learning before college, and he leads the Thiel Foundation, which works to advance technological progress and long-term thinking about the future. Fortune magazine has described him as “perhaps America’s leading public intellectual today, assuming a mantle once held by the likes of Thorstein Veblen or Norman Mailer.” He’s depicted in the feature film The Social Network and a major character in the HBO television series Silicon Valley is based on him.
Most recently, he has authored a best-selling book, Zero to One: Notes on Startups, or How to Build the Future (Crown Business, 2014). Mark Zuckerberg, CEO of Facebook has written, “this book delivers completely new and refreshing ideas on how to create value in the world.” The Economist says this book should be read “by anyone seeking a thoughtful alternative to the current pervasive gloom about the prospects for the world.”
Peter spoke about several topics from his new book and took a few questions from the audience to close out the evening. The conversation ranged from topics such as competition, globalization and technology to an exploration of questions about faith and Christian identity in Silicon Valley.
Missed the event and want to listen?
[soundcloud url=”https://api.soundcloud.com/tracks/224322472″ params=”color=ff5500&inverse=false&auto_play=false&show_user=true” width=”100%” height=”20″ iframe=”true” /]